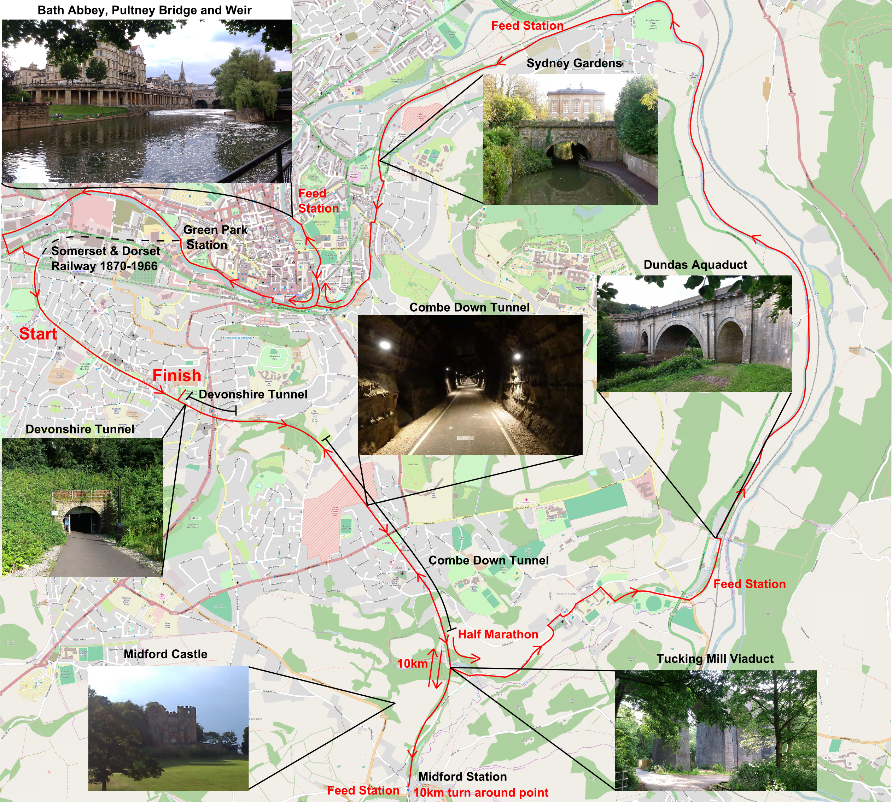 The route for the half marathon is 22.5km long and the marathon is 43.7km long as we had to include all these beautiful features of Bath's history and we couldn't bring ourselves to make it any shorter!

The whole route is on a fast tarmaced surface with gentle gradients of no more than 2% in only a few places on the route. This makes this a great fast course, certainly the fastest Relish Running course out there and there is a great chance of recording a PB on this route!

The 10km heads steadily uphill towards the 408m long Devonshire tunnel, passing by the finish area on the left hand side and registration area in Bloomfield Open Space. After rounding the first tunnel runners emerge out in the wooded Lyncombe Vale area. There is 1km of open running along the elevated embankment and through cuttings before entering Combe Down tunnel. Combe Down Tunnel is over 1 mile in length and that makes this event the running race with the longest tunneled section in the Britain.

The race heads over Tucking Mill viaduct on a gentle downhill gradient towards Midford Station. Look out for Midford Castle on the right hand elevetion! At Midford station runners make a U turn around the cones before retracing their steps through the Combe Down Tunnels and Devonshire Tunnel. Please keep to the left hand side as you start to run back to Bath to ensure you don't meet runners heading the other way.

This route will be an accurate 10km, though don't be surprised if your Garmin thinks you have run up and over the hills of Bath and have been flying up 10% hills!

The 5km  will run through the 408m long Devonshire Tunnel and out into Lyncombe Vale. There will be a turn around point just before the entrance to the Combe Down Tunnel before runners retrace their steps to Brickfield's Park.
Privacy Policy Terms and Conditions