The race starts at Black Rock with views of the route ahead along the Cheddar Gorge stretching out into the distance.

A great variety of terrain makes this an all round challenge with a mix of open meadows, rocky outcrops, a few steps and cliff edge running.

Cheddar Gorge is one of the Seven Wonders of the UK and running around the gorge is very special experience - definitely a race not to be missed!

Starting above Black Rock, the first 1km is a gentle meander down hill towards Black Rock, followed by a gentle downhill on a very rocky track. The first climb comes after 1.5km, a short sharp climb off the main track as the route heads towards Cheddar. After 1 mile, the 6km runners branch off and make a right turn and start their climb up the valley. 10km runners process straight ahead, hope over a stone stile and start the climb of the infamous Hell Steps. Not one, but two rather large flights of steps which will bring you to the most amazing view looking right down the gorge from 2km to 2.7km.

Once off the cliff top path the route meanders through some woodland for the big reveal at 3km, a great view of the gorge mouth with views across the Somerset levels. And to take you even closer, we even hop over the perimeter wall for a brief moment. You are not actually as close as it may appear as you approach the wall - just be careful with those selfies!

From here there is a gradual rise to the 4km marker, which kicks up at the end as runners enter Piney Sleight. Some good flat running from here, past the 5km point gives runners a chance to pick up the pace again. Coming up next is a short, steep and stoney descent - take care here. You will also see runners from the 6km race joining you at the point. Both routes converge and carry on up the other side of the dip. As you contour around the ridge past the 6km marker you will have really nice views across the valley to the event village and festival site.

After a decent down to the 7km point there is another drinks station (FS). 6km and 10km runners needs to go straight head, as shortly after the drinks station the Half Marathon runners will branch off left.  The area ahead is steeped in history; the whole area has been extensively mined from the Roman times through to Victorian. This area is generally flat with a few little climbs rises along the way.

Shortly after the 8km point runners will turn right and climb out of this little valley which is called Velvet Bottom. Another right turn and runners are heading back down the length of Velvet Bottom but from an elevated position. This final km is flat as you head to a great reception ahead at the finish line. 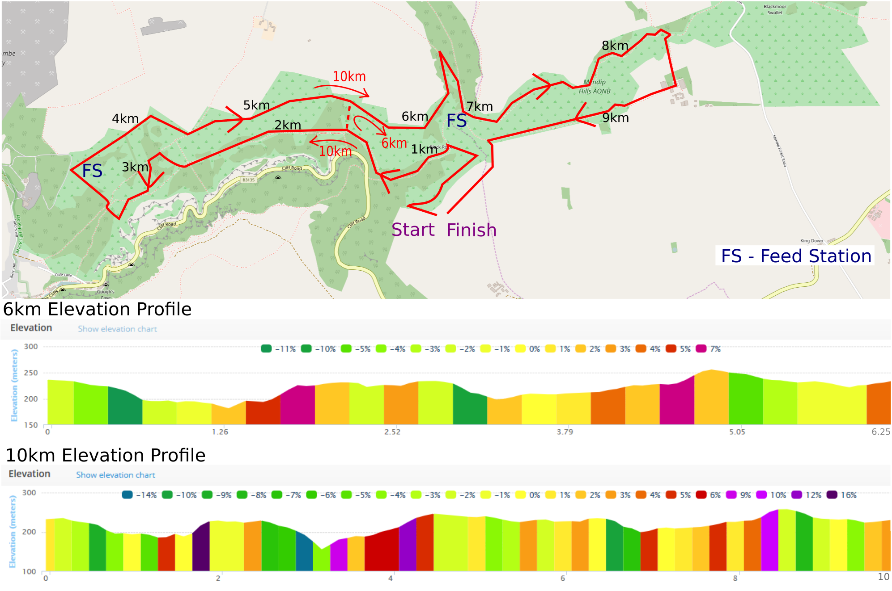