Registrations open for the 2023 series!

Two Tunnels Half MarathonThere are 3 different half marathon routes, known as Return Ticket, Hilly Ticket and City Ticket, being run through the Two Tunnels this year, please scroll down to find the course details for the date you are looking at racing.

This is a 2 lap out and back course which is flat and fast along the Two Tunnels Greenway path - perfect for setting a PB! It is a certified accurate course as measured by UK Athletics, reference number 236/2201b. 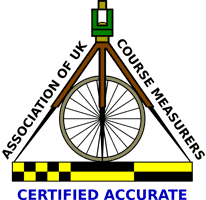 Upon exiting Combe Down Tunnel runners head over Tucking Mill viaduct where there will be a drinks station. Shortly after the drinks station runners will retrace their steps back through the Combe Down and Odd Down Tunnels. When runners return to the Brickfields site you will need to turn right to start your 2nd lap and merge with 10km runners heading out on to the course to complete a loop of the course again. When returning to Brickfields for a 2nd time you will need to turn left and head directly to the finish line. 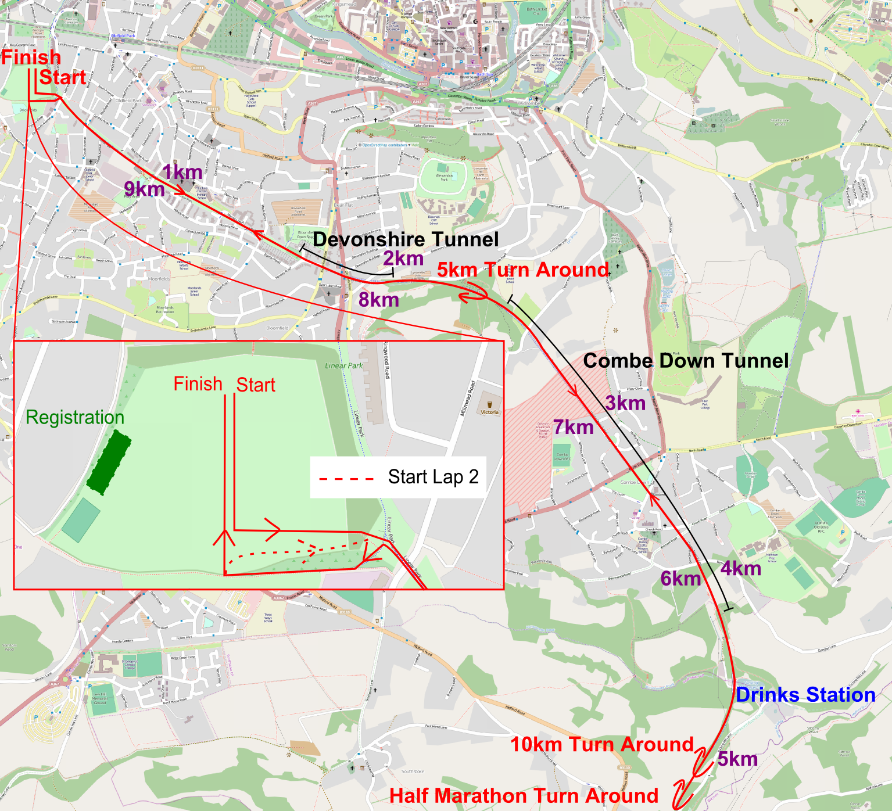 The 1 lap Up & Over Half Marathon is actually NOT that hilly! We just needed a name to differentiate it from the flat and fast 'Return Ticket', and went with Hilly, though Trail would probably have been more accurate. There is only one good hill on the whole course. This route has beautiful hill top views and takes in even more history of the Somerset & Dorset Railway era by following the routes of the railway lines and the Somerset Coal Canal.

Start times from 10:00am. Please see the Event Info page for Provisional Schedules.

The first 3 miles of this route and flat and fast and follow the line of the Somerset & Dorset Railway. Runners will pass through the Two Tunnels, the first tunnel after approximately 1 mile which is 408m long the second longer tunnel another mile later. Runners will emerge from the tunnel on Tucking Mill viaduct where runners can grab a welcome drink. Runners of the up and over Half Marathon will carry straight ahead at this point (not turning where the Out & Back Half Marathon does) towards the remaining platform of Midford Station of the Somerset & Dorset Railway.

Ahead is a small pub car park, please be careful when crossing the car park (approx 25m long) and keep to the marked footpath shown on the tarmac. After another 200m runners will leave the line of the Somerset & Dorset Railway and make a 180 degree turn to the right and join the road running parallel to the track. Please keep tight to the right hand side when running on this short section of the road.

Runners will then loop around and under the viaduct holding the pub car park and join the line of the Somerset Coal Canal. The Somerset Coal Canal operated from 1805 - 1898 when it delivered coal from the North Somerset Coalfields onto the Kennet & Avon Canal and from there into surrounding cities and towns. It delivered 100,000 tons of coal a year and was the most succcesful canal of it's kind in the country. The speedy service offered by the railway put the canal network under strain and lead to the closure of the canal in 1898. The railway lines often capitalised on the closure by building new lines over the top of the old canal routes as they offered level routes across the countryside with bridges and tunnels already in place. The Somerset and Coal canal was replaced by the Camerton to Limpley Stoke Railway which built by Great Western Railway in 1910 before closing itself in 1951. As the relationship between Canal and Railway is so well entwined there are many features of both throughout this route.

The first features of the canal and railway reveal themselves straight away; on your right hand side is the old canal bed and the Midford Aquaduct on the left hand side which connected the Radstock and Dunketon Line of the Somerset Coal Canal. As you loop around you will go under an impressive viaduct of the Camerton & Limpley Stoke Railway.

There a few flat miles ahead where runner will follow the line of the canal on their right hand side. Ahead is a road crossing and a Feed Station which marks the start of the hilly loop. The feed station itself is under the a viaduct of the Railway line and in the bed of the canal. After passing through the Feed Station you will see the start of a flight of 21 locks through Engine Wood which raised canal boats up and over the hill to Combe Hay.

Runners will now turn off the canal path (which now goes through private land) and climb up the hill to South Stoke and great views from the top of the hills. The next mile of the course is flat and follows the ridge along the top of the hill and around the back of the Odd Down Park & Ride where many of you may have parked to get to the event. A nice down hill section brings you back down into Combe Hay village and runners will pass under a culvert (small tunnel) under the line of the railway.

When you emerge in the village stick the left hand side as you follow the country roads back to the line of the railway line. Here you will follow the trackbed back to the Feed Station under the viaduct and in the bed of the canal. From here runners retrace their steps back to Midford and the Somerset Railway Line towards the Tucking Mill Feed Station. From here runners trace their steps back to Brickfields Park following the same route as the other events. 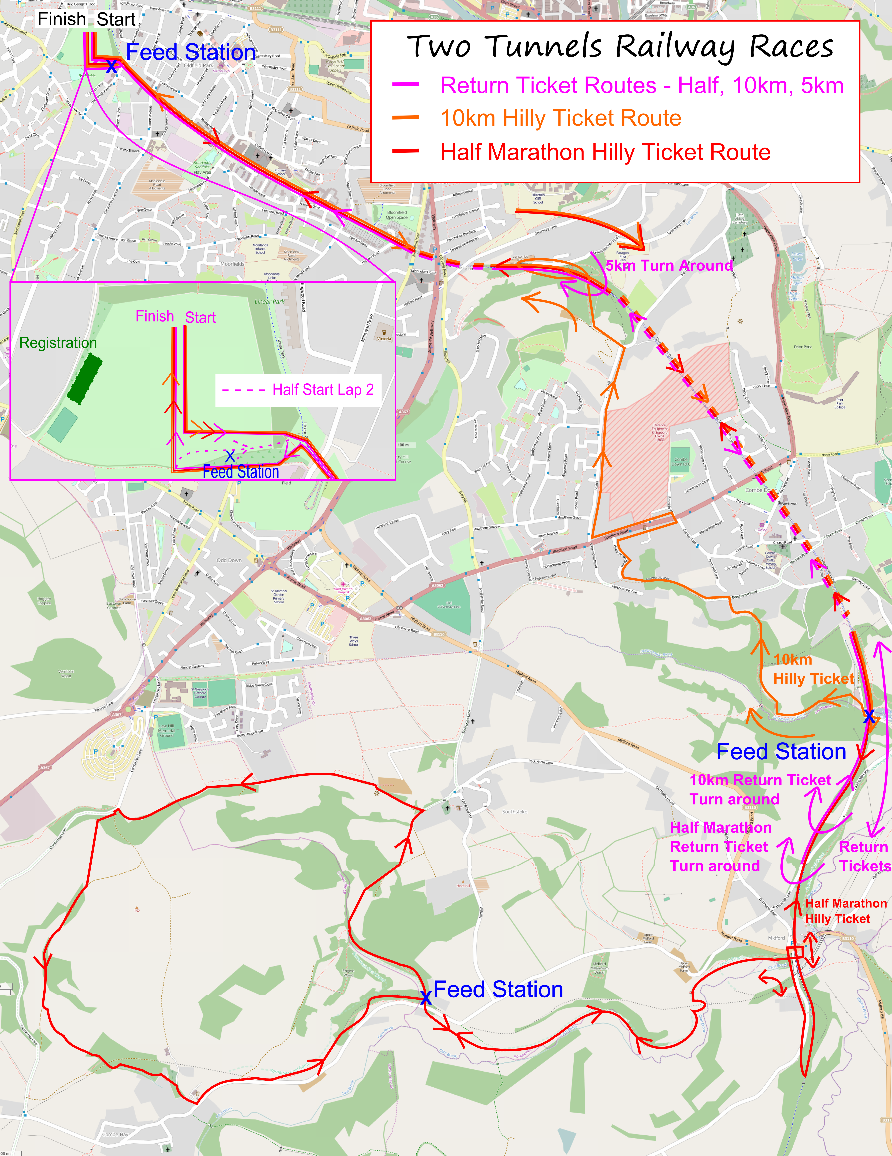 The 1 lap looped Two Tunnels Half Marathon course takes in the the best of the countryside views along the Limpley Stoke Valley as well as beautiful city centre running through the heart of Bath along the footpaths and riverside trails.

Upon exiting Combe Down Tunnel runners head over Tucking Mill viaduct. Runners turn left after crossing the viaduct and towards the steps to Tucking Mill reservoir. Following the public footpath leads runners onto Tucking Mill Lane past the house of the world renowned Geologist William Smith who produced the first Geological Map of the country. Tucking Mill Lane is not being closed by the race so there may well be traffic along this section. Please be careful, stick to the left hand side of the road, and follow the direction of the marshals. 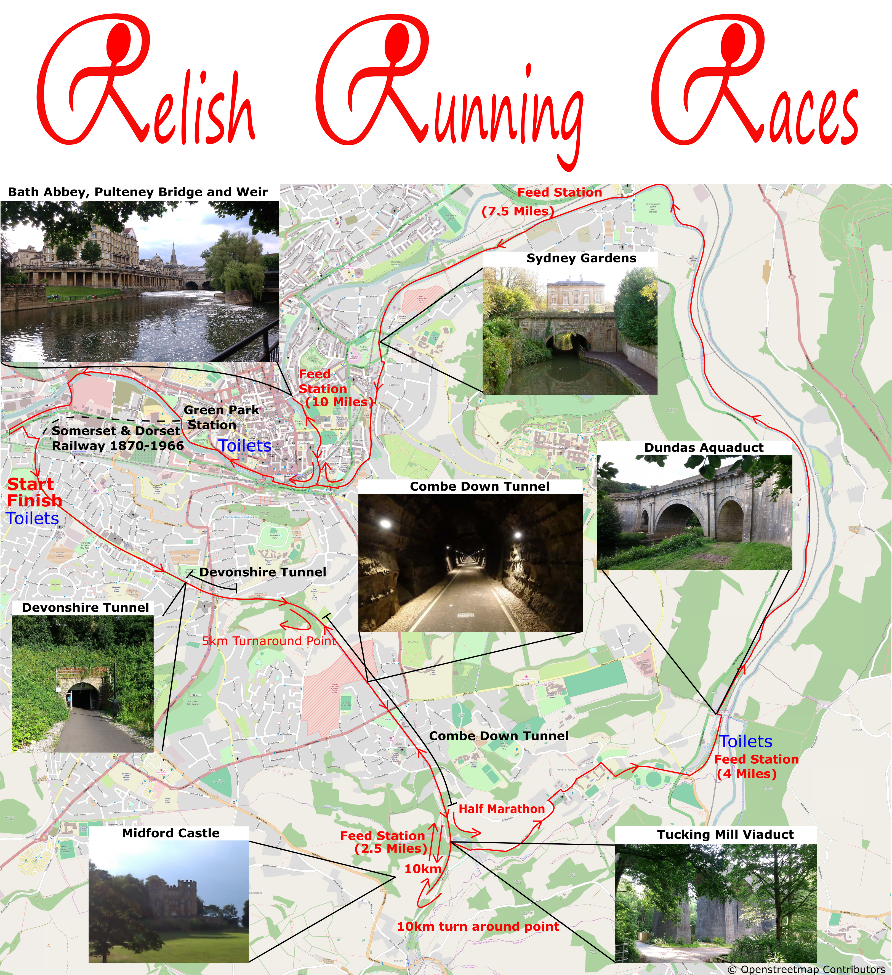